A few days ago, a beloved former student of mine (a black man) from the charter school where I used to teach tagged me on Facebook with the following meme: 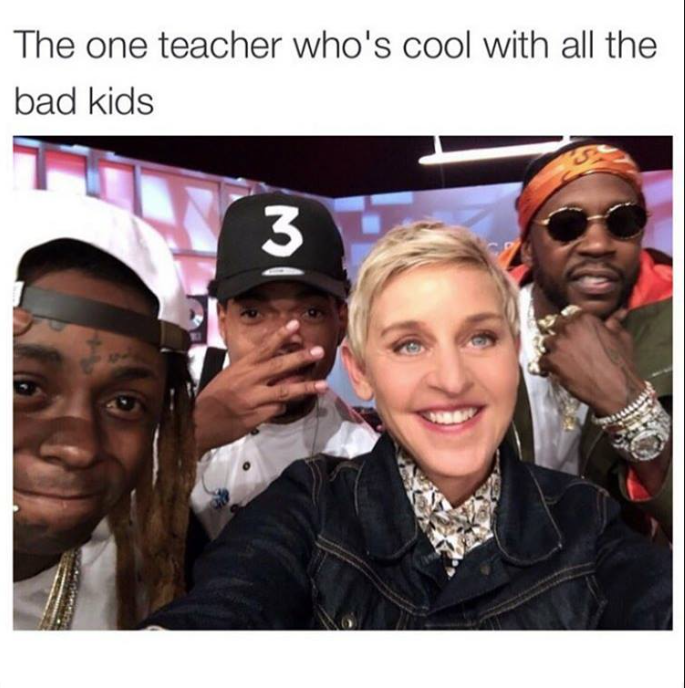 (It’s probably good to note here that I’m one of those teachers that is better in retrospect than I am in the present moment. I’m kind of like childbirth that way. When my class is over, you’re glad you went through it and tend to forget the pain.)

Perhaps it is this amnesia effect that caused my beloved former student to forget that I ruin jokes. And I ruined this one big time. The man was trying to be nice to me in a public forum, and I replied with:

There were no bad kids in any of the places I’ve taught, smarty pants.

Then another former student chimed in: I was bad you were cool with me lol.

But here’s the thing, both of these former students were lovely, talented, hard-working, and kind. Yet once pulled over by police, the only context either may have in this country is as someone who is inherently bad.

If the Ellen meme was ever funny, it isn’t now. Not after I watched the film of Terence Crutcher’s murder, the cop voice-over calling this unarmed man a “bad dude.” Not after Trayvon Martin, Michael Brown, Sandra Bland, Philando Castile. . . the list goes on. You know their names. We all know their names.

Statistically speaking, the only one in that photograph who should feel safe is Ellen. Everyone else should be running for their lives.

The former student who posted the meme gave the okay for this post. Want some context for him? He was a brilliant AP student, and is now a college athlete, a religious person, a wonderful man. I also know damn well that none of that would matter in a situation like Mr. Crutcher or Mr. Castile found themselves in.

Do you want to know the most common question many white people ask me when they find out that I taught at that particular charter high school where most of my students were black?

Let that sink in a minute. Was I scared of what? Of the most dedicated students I’ve ever had the pleasure of working with? (It was a little scary when books I meant to last for a few weeks of instruction were read within two days of my passing them out. That happened a lot at that school. You know who you are, class of 2014.)

So no, a meme showing a successful white business woman and entertainer surrounded by successful black business men entertainers who are referenced as “bad” isn’t funny. It isn’t funny as long as unarmed black people are shot in the streets by professional law enforcement.

I am a professional school teacher. I am thoroughly trained and dedicated. It’s a great job, if you love it, and I do. I respect teachers as a whole. However, I consider teacher incompetence to be social injustice, and I have zero tolerance for teachers who harm kids.

In the same way, I respect law enforcement. I am grateful to first responders, and count many as my friends and former students. However, I am intolerant of law enforcement who carry their prejudices into a job where they get to carry a gun. These murders are not unavoidable situations. They aren’t regrettable mistakes. They are the result of generations of systemic, willful ignorance that looks at a picture of someone who looks like me and thinks good and a picture of someone who looks like Terence Cutcher and thinks bad.

A writer and professor I deeply respect once told me that dialogue is important in situations like these, so I’m leaving comments open for now. But I swear if you are white and want to tell me that racial prejudice isn’t a thing in our country because when you were a kid another kid beat you up, and he was black, please rest. Same to you with the All Lives Matter razzamatazz. Save it for another girl.