Maxwell Perkins Is My Homeboy 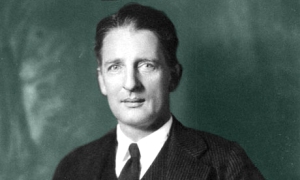 Maxwell Perkins was literary editor to Ernest Hemingway, F. Scott Fitzgerald and Thomas Wolfe. Perkins was responsible for helping forth such classics as The Sun Also Rises, A Farewell to Arms, The Great Gatsby and many more American works that we take for granted as integral to the literary heritage of our country.

Maxwell Perkins is perhaps most famous for teasing out the best possible work from recalcitrant, alcoholic, undisciplined writers. I picture him at his desk, so handsome and sure. So knowledgeable and intelligent.

You can do this work, he says. I believe in you.

What a powerful talisman is a good editor’s belief in a writer’s work.

I’ve had a great year in my writing career. Since September 2014, I’ve seen the acquisition of three of my novels, four short stories, two poems and an article. My writing group where I workshop new work is honest and helpful. I’m producing new material. I’ve enjoyed several invitations to speak in my community.

Best of all, I’ve met inspired and intelligent editors who understand my stories better than I do. Writing is funny because without a good editor all hell breaks loose. If I were a house builder, I would not build a house that I thought was awesome only to find that when people went to move in there was no roof on top. That would be absurd.

Yet I am a writer so I write a novel that I think is awesome only to find out that I have repeated some random word so many times throughout the manuscript that it has an unintentionally comic effect. Or a single character shows up as Bruce in one chapter and Greg in another. How absurd.

No matter how many times I revise, edit, filter through writing group, and revise again, without a good editor I would be lost. Since I began my fiction writing journey in earnest ten years ago, I’ve had a photo of Maxwell Perkins on my inspiration board. In truth, I’ve found my own Maxwell Perkins in several of the insightful and intelligent editors I’ve met along the way.

I’m not undisciplined and I don’t drink, but God knows I need help too. My editors have been co-sculptors, diligently shaping and shining my work with much more grace than I ever manage on my own. Often they’ve understood my work better than I have myself.  My editors’ belief in my stories has been an honor.

Editors can be unsung heroes. Without the good ones, our lives as writers and readers would be poorer than we could imagine.

Maureen O’Leary Wanket is the author of How to Be Manly, and The Arrow,