Does Your Paranormal Urban Fantasy Pass The Test? 7 Things You Can Improve On

As exciting as it is to be a Paranormal Urban Fantasy author, the work is not easy. When writing my novels,  here are seven tests I measure my story against as I revise:

The world follows the rules.

Characters have to do as they would do. If a reader can tell which character is speaking in a dialogue even without an identification tag, then I’m doing my job. A character should never do or say something out of sync with his normal personality without a good reason. To serve a plot point is not a good enough reason. Even demons, witches, goddesses and rock star gods require consistent motivations behind their words and actions.

The dialogue works to reveal character, not plot.

Dialogue is like pepper. Used improperly, it ruins everything. When my characters speak, it is to reveal their personalities, not to further the plot.  Think about it: In real life, we rarely narrate our actions or intentions to the people around us.  Dialogue should sound natural, even among the supernatural.

Every chapter ends with a reason to turn the page.

The great Elmore Leonard once said, “I try to leave out the part that readers tend to skip.” Each chapter should raise the stakes for the characters and propel the story forward. My goal is to finish every chapter so that my readers must turn the page and find out what happens next. I’m trying to make them stay up past their bedtimes, not fall asleep.

The story shows, not tells.

One of my favorite characters I’ve ever written is Eli, a reformed half-demon surfer who is falling desperately in love with Fynn, the goddess he was bred to kill.  Here is a passage showing Eli from Fynn’s perspective after he gets her alone:

“He took off his flannel shirt and snapped it so that it billowed like a sail.  He tucked it under her chin. His knuckles rubbed against her neck.” Then later, “He kneeled to touch her forehead with a bent finger. She flinched. He brought his hand back. His eyes were downcast and Fynn’s mind flashed on the vision of a little boy. He held a fresh flower, torn to pieces. Then it was his own heart, shredded and dripping through his fingers.”

His actions show that he is no murderer, at least not anymore.  Fynn’s vision shows he is a damaged character, but his intentions are sweet. The real world reveals itself to us through our senses, and people through their actions. My goal is to make my readers forget that my story isn’t real.

The ending makes sense, but can’t be seen a mile away.

The balancing act is an ending that surprises, yet satisfies. Keeping characters true to their motivations is one way to achieve this. The ending must tie up loose ends, and when world-building, that can be a challenge.  I know  how a novel is going to end when I begin a project, but I will rewrite the ending dozens of times. It’s imperative to get the timing and the tone just right.  My readers and I have been on a magic carpet ride together. It’s my job to make the landing awesome.

Join me in the world I’ve created in THE ARROW, a story about the modern incarnation of an ancient goddess. Click on the cover to check it out. 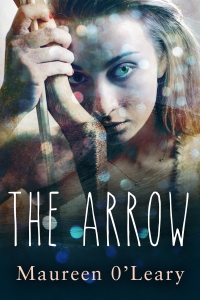